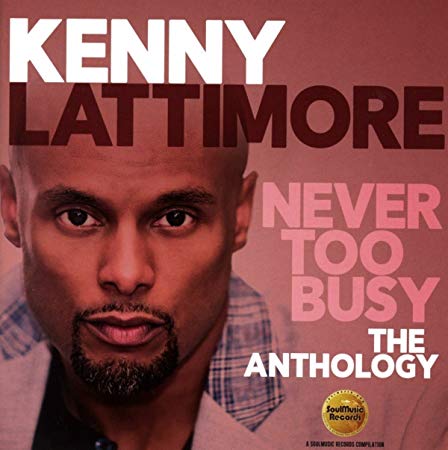 Click on CD cover
to listen or purchase
https://www.amazon.com/gp/product/B07CLRQLRK/ref=as_li_qf_asin_il_tl?ie=UTF8&tag=soultracks-20&creative=9325&linkCode=as2&creativeASIN=B07CLRQLRK&linkId=83ccd66bf57624d57a73fcc28b97ea64

SoulMusic Records expands upon its series of two-disc retrospectives of R&B divas and soul men with a 30-track collection of the frequently lauded, but often commercially overlooked, Kenny Lattimore. Whereas many of the SMR anthologies are centered on the 1970s and ‘80s, the Lattimore release (fittingly titled Never Too Busy) emphasizes the distinguished tenor crooner’s output from the mid-‘90s to the mid-2000s.

SoulMusic Records expands upon its series of two-disc retrospectives of R&B divas and soul men with a 30-track collection of the frequently lauded, but often commercially overlooked, Kenny Lattimore. Whereas many of the SMR anthologies are centered on the 1970s and ‘80s, the Lattimore release (fittingly titled Never Too Busy) emphasizes the distinguished tenor crooner’s output from the mid-‘90s to the mid-2000s.

Both disc one and disc two of Never Too Busy open with selections from the lone 1989 LP by Maniquin, the Washington, D.C.-based quintet which Lattimore joined during high school. The breezy midtempo synth-funk of “Funny Feeling” was co-produced by Charlie and Ronnie Wilson of The Gap Band and Ernesto Phillips of Starpoint. The on-point keyboard arrangement with subtly electric guitar dynamics brings out the young singer’s potential as an energetic interpreter of inspired soul with a breathtaking dynamic approach. Meanwhile, his own composition “Now and Then” (co-written with sister Trinita Lattimore) is a deeply sentimental ballad with melodic transitions reminiscent of Earth, Wind & Fire and Average White Band. Kenny’s smooth shifts from tender falsetto to surefire belting give the tune emotional memorability and structural authenticity.

The first disc showcases Lattimore’s midtempo (and occasionally uptempo) selections. Culling largely from his first three solo albums, highlights include the Dave “Jam” Hall and Kipper Jones-produced title cut, the 1996 top-20 R&B hit which introduced the singer to audiences at large. Two decades on, the expertly refined subtlety of the production and Lattmore’s relaxed, unaffected phrasing rings every bit as true (and serves as a reminder of a certain musical component that’s often absent in today’s soundscape). “Just What It Takes,” the head-nodder which was the follow-up single, further highlights his ability to restrain and let loose at just the right moments. That the Keith Crouch-helmed number failed to crack the top 40 upon release is a reminder that urban radio trends even in the late ‘90s could be somewhat limiting. Lesser known, the funky “Destiny” from Kenny’s sophomore album, From the Soul of Man (produced by him with Vidal Davis and Carvin Haggins) is an ideal example of adult-contemporary soul meshed effortlessly with hip-hop undertones. Lattimore’s self-harmonized vocal arrangements give the track a special luster that few could replicate.

Four cuts from Weekend, Kenny’s third album which came and went far too quickly in 2001, are also spotlighted in the first half of the anthology. The summery groove and enticing hook of the title cut sound just as relevant today, owing much to his fluid treatment of the relatable lyrics and unforgettable melodies. While the follow-up “Don’t Deserve” isn’t as impactful years on, the coasting “Come to Me” and The Characters-produced “If Love Is What You Want” both give Lattimore an ideal outlet for intertwining his sophisticated style with cutting-edge rhythmic elements.

Of course, many consider Lattimore foremost a balladeer, owing largely to the impact of “For You,” the endearing ballad of devotion which put him on the map and went on to become a timeless wedding song. Penned by then-unknown Kenny Lerum, a former classmate of Kenny’s, it set the bar high for him on subsequent albums. But Lattimore didn’t steer clear of traveling gutsier ballad terrain, as evidenced by his deeply rich reading of “I Love You More Than You’ll Ever Know,” a 1968 Blood, Sweat & Tears gem also popularized in 1973 by Donny Hathaway. A bit more in keeping with late-‘90s radio patterns (but not overtly so), the Daryl Simmons co-write, “If I Lose My Woman,” gives Lattimore the space to flex his dynamic muscles across humble lyrical passages and yearning melody lines, while the daydreamy “Heaven and Earth” (co-written by Lerum and co-produced by Lattimore) lays bare his gift for understated strength amidst a soulful acoustic and string-layered arrangement.

Never Too Busy also comprises more than half a dozen Lattimore nuggets culled from outside sources and limited singles. Especially notable, the Lattimaw Soul House Mix of 1998’s “Days Like This” is a rhythmically fierce and melodically refreshing showcase of his ad-libbing prowess, while the serene groover “Can’t Get Enough” from the Love Jones soundtrack (co-produced by him with A Touch of Jazz) once again shines the light on his specialty for smoothly harmonic background stylings. Additionally, two tracks from his 2006 joint album with then-wife Chante’ Moore, Uncovered, offer a further glimpse of his agility with kinetic tunes, particularly the shiny “Tonight (2 Step),” an idyllically arranged dancer with shimmering vocal chemistry between the singers.

30 tracks deep and over two and a half hours in length, Never Too Busy should find a most welcome home in the collections of all who appreciate authentic R&B balladry and grooves from the 1990s (and beyond). Guided by the innately grounded and well-versed tone and delivery of a consummate interpreter of song, the material within (itself finely composed and handsomely produced) stands the test of time in sincere message and musicality. Highly recommended.